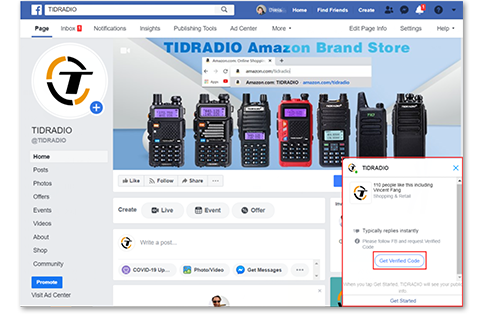 Did not receive the verified code?

1. Please check the Spam in your email.

We will complete the review within 24 hours,and then message you via Facrbook,please pay attention.

TIDRADIO is one of the leading companies dealing with developing, production and distributing of radio products in the international market.

The command of very communicable and high-educated professionals, who can help you to choose the radio which is the most suitable for you, considering all your needs. They always will find an interesting and beneficial offer for both retailers and wholesale buyers.

Our Fulfilled by Amazon

The powerful Amazon logistics provides safety guarantee for your order delivery, and delivers the products to you in time.You don't need to worry about all logistics issues, it can help us keep the price at a comfortable level, have stock in stock and deliver as soon as possible.

The staff of highly qualified specialists, who follows the latest innovations in the field of radio equipment and reply to all your questions, help you to resolve any problems with your radio.Thank you for choosing TIDRADIO as a partner. We will do our best to provide You and your business with a high quality of service.

May 2010: Get the provincial high-tech enterprise certification

October 2010: R & D center was founded in Shenzhen.,Announce the launch of DMR field

May 1991: "TIDRADIO" is exported to the southeast Asian market.Starting the overseas markets

September 1990: To obtain the right of free export of products

August 1984: The Nan An Xiamei radio factory have been moved to LiCheng District

August 1981: August 1981: The predecessor of Yilaidun Electronic CO., LTD. is found at the Nan An Xiamei

KEEP UPDATED WITH US! REGISTER OUR NEWSLETTER FOR EXCLUSIVE BENEFITS